Event drew approximately 50,000 visitors and 3,000 exhibitors to retain its reputation as one of Asia's most influential trade fair for hardware

The 2015 China International Hardware Show (CIHS 2015) successfully concluded at the National Exhibition & Convention Center (Shanghai) on October 23. It was the fifteenth year since the foundation of CIHS. Both exhibitors and visitors numbers greatly increased this year compared with those of the previous editions. Around 3,000 exhibiting companies and nearly 50,000 visitors participated in CIHS 2015 covering an exhibiting space of 150,000 square meters. CIHS has broken records in key figures above.

New Show Dates and New Exhibition Venue
CIHS left the Shanghai New International Expo Center and moved to the National Exhibition & Convention Center (Shanghai) because the scale and long-term cooperation capability of the new exhibition center better meets the needs of the show. The brand new venue offers larger space and more opportunities for CIHS and plays an important role in the future development of the show.

Shahadat Hussain from India Sam Intenernational came to China to visit CIHS for the first time this year. During the past 15 years, he often visited and purchased at the Canton Fair. According to Shahadat Hussain, “this was the first year that I visited CIHS. I think CIHS is better and more specialized than Canton Fair. I communicated with many manufacturers and factories at the show and they promised me a very good price.”

With the show dates fixed for 21-23 October for the coming years, not only can existing exhibitors and buyers plan better ahead, but prospective buyers attending the Canton Fair first can easily plan their trip Shanghai in the future.

New Layout and New Start
In addition to the impressive pavilions of German and Taiwan, CIHS 2015 also welcomed national group participations from India, South Korea, Japan and Hong Kong. As the largest international hardware event in Asia and the second largest in the world, CIHS 2015 has greatly increased the number of international pavilions, overseas buyers, domestic exhibitors and buyers, and has become a one-stop platform for international buyers as well as an international platform to showcase new products and technologies.

“We have been busy in meeting visitors from yesterday until this morning”, a manager of Canada Perth Fastener Company stated, “this is the first time that we exhibit at the CIHS. We have received an unexpected result during the event. A large number of visitors were quite interested in our products and some were willing to buy our products. I think we would come back to exhibit at the show next year.”

New Activities and New Services
22 projects and 33 on-site activities were other highlights of CIHS 2015. In addition to the “Buying Day”, the “8th Cutting Grinding & Polishing Applied Technology Forum”, new product showcases of “China Lockset and Security Innovation Design Competition”, “China Building Hardware Product Innovation Design Competition” and other activities which were popular with the visitors during the previous editions, CIHS 2015 also released a series of new activities: including the “Match & Meet Program” which matches the exhibitors and the visitors' demands, the “Hardware Tour” specially designed for the overseas buyers, the “Overseas Trade Seminar” which focuses on how to access the American and ASEAN market, as well as the “Apply of Robot in the Hardware Industry” which conforms to the industrial development trends.

In order to provide better services and create more convenient experiences for the exhibitors and visitors, the Organizers also prepared telephones and WIFI in the exhibition halls. The official WeChat social media group of CIHS released information related to traffic, accommodation and all kinds of CIHS related news every day before and during the event.

CIHS 2016
CIHS 2016 will be held again at the National Exhibition & Convention Center (Shanghai) on 21st-23rd October, 2016. The exhibiting space will expand to 160,000 square meters.
CIHS 2016 will continue to use the layout of CIHS 2015, including the International Hall, Tools Hall, Building Hardware Hall and the Lockset Hall. Moreover, a Gardening Area will be launched in the East Hall. More specialized and a better division of exhibiting space will bring trade buyers greater convenience in their sourcing and buying activities.

About China International Hardware Show
The China International Hardware Show (CIHS) in Shanghai is Asia's largest trade fair for the entire hardware and DIY sectors offering specialist traders and buyers a comprehensive category of products and services ranging from Tools, DIY and Building Hardware to Security, Locks and Fittings. Increasingly, European and American exhibitors are using this show as their gateway to markets in Asia.
www.hardwareshow-china.com

About the Organizers
Koelnmesse
As a world-renowned trade fair organizer, Koelnmesse has an excellent track record for organizing some of the world's most successful trade events, such as the accomplished International Hardware Fair and spoga+gafa in Cologne, Germany. With over 90 years' experience in organizing large-scale commercial events connecting buyers and sellers, Koelnmesse brings forth an unrivaled skill-set and expertise needed to develop the China International Hardware Show into one of the premier international trade shows in the world.
www.koelnmesse.com 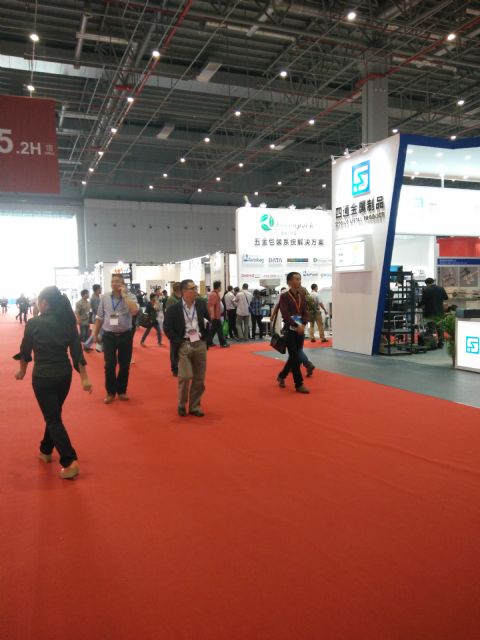 CIHS 2015 impresses the attendees with various new services and experience that had been never seen before.