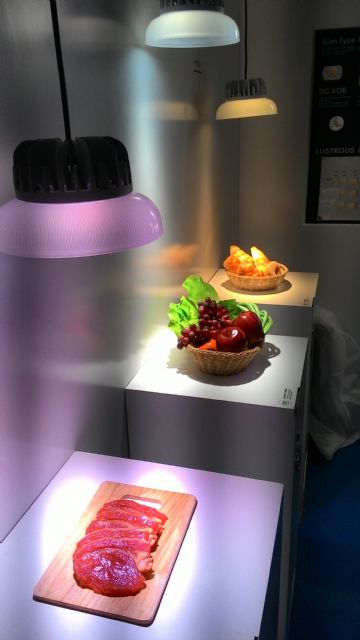 Lustrous's Bartender LED modules in lighting fixtures project vivid lighting effect on merchandise like food.
Lustrous Technology Ltd., a leading maker of high-power LED packages in Taiwan founded in 2004 that set up its own "LUSTROUS" brand the same year, promoted the Bartender series of system chip-on-board (XOB) modules, which has the phosphor mixture technology that enables the devices to emit lighting with vivid effect on merchandises like raw meat, vegetables and fruits.

Bartender modules are embedded with power driver and LED chips on the same printed circuit board (PCB), making them lighter and much easier to combine with the unique phosphor mixture than most competing types to produce better quality of tint and enable better control of color.

The company worked with the Taiwan government-backed Industrial Technology Research Institute (ITRI) to develop the phosphor formula based on studies of physiological response to color using statistical analysis method.

The Bartender modules come with an optical lens that is quite resistant to moisture and oxidization thanks to a unique molding technique developed by Lustrous itself.

The modules have been built into lighting fixtures by many lighting manufacturers including Yah Juang Enterprise Ltd. of Taiwan.

Lustrous supplies a wide range of high-power LED packages made with chip-on-board (COP) technology for to-order specifications from customers. The company is recognized as the world's first LED maker to adopt the packaging technology from the silicon-chip industry and has won many patents on LED COB packaging, which enables the maker to further simplify its process and downsize its modules while improving thermal dissipation in the packages.

In recent years, the company has sharpened its capability in optical-lens design and phosphor formula development with a team specializing in electrical engineering, LED packaging and optics, enabling it to provide customers with optimized lighting solutions according to their specifications.

Lustrous's module designs focus on optimal light color, quality, energy conservation, and luminous efficacy, which have been achieved thanks to its close cooperation and communication with customers.