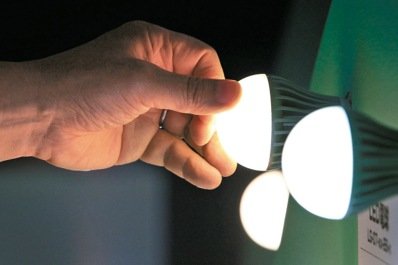 Everlight expects its performance in LED lighting business to keep growing amid a supply glut and lingering worries about continued price drops (photo courtesy of UDN.com).

Despite the exacerbating supply glut and growing underselling rivalry which has seriously dampened the global LED industry since last year, Taiwan-based Everlight Electronics Co., Ltd., a large-sized LED packager and branded vendor of LED lighting, remains optimistic about the prospects of the LED lighting market in the short term, stressed Robert Yeh, the firm's chairman, at an investor conference held earlier.

At the conference, Yeh stated with confidence that Everlight will definitely score better performance than local peers this year in the LED lighting business for some reasons.

After winning a lawsuit filed by Japan's Nichia on patent infringements sometime in the first half of last year, Yeh said, Everlight has seen an influx of orders returning from LED lighting customers who had been concerned about the patent issue. In the face of the transition, the chairman emphasized that his company, which can offer more competitive prices than most of its counterparts, expects the rate of the contribution of LED lighting products to annual turnover to double to 20 percent this year from about 11 percent seen last year.

Another factor among others boosting Yeh's confidence on Everlight's brighter outlooks of LED lighting business is the firm's rigorous, cutting-edge supply chain management. Backed by this advantage that can help sustain profitability and gross profit rates, the chairman indicated Everlight is expected to keep buoyant in the sector, even if price of LED lighting is believed to remain week in the coming few years.

For LED makers, 2015 was definitely a year to forget, when global LED output value dropped for the first time in history by three percent yearly to US$14.325 billion as reported by LEDinside, a division of Taipei-based TrendForce, a market research firm. Under the scenario, Everlight posted combined revenue of NT$28.87 billion (US$902.18 million) in 2015, down 5.6 percent yearly, with net profits of only NT$1.83 billion (US$57.18 million), 15.9 percent lower than a year ago.