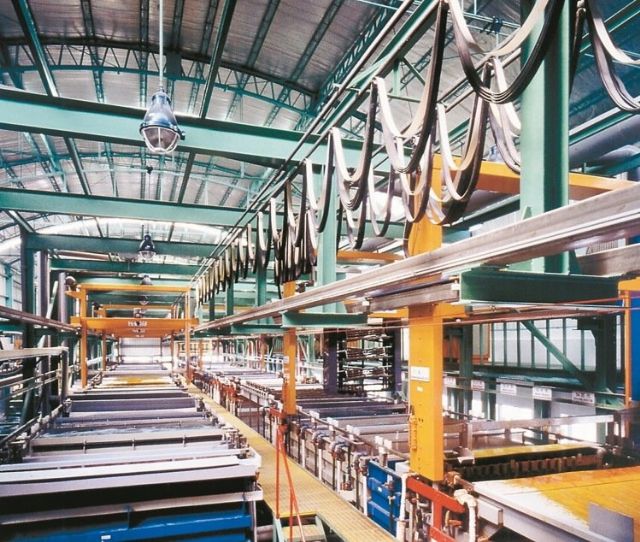 Tong Yang finished the first half of this year with great performance (a view inside the firm’s plating factory in Taiwan, photo courtesy of UDN.com)

Mainly on the payoff of its efforts on boosting production capability and capacity to better tap the aftermarket segment of the global auto parts market, the Taiwan-based Tong Yang Industry Co., Ltd., the island's largest auto parts manufacturing conglomerate, witnessed its pretax profits surge significantly in the first half of this year.

According to the latest financial statement by Tong Yang, which is listed on the Taiwan Stock Exchange, its cumulative pretax profits for the first six months of the year totaled NT$1.502 billion (about US$46.93 million), or NT$2.43 per share, for a whopping growth of 111 percent over a year ago. The figure hits a new high for the period in the company's history.

In June alone, Tong Yang saw its pretax profits amounted to NT$237 million (US$7.4 million), an all-time high for the month in history. The amount, after subtracted by exchange losses of NT$50.57 million (US$1.58 million), still represents an impressive increase of 106 percent increase compared to the corresponding figure tallied last June.

Tong Yang's rosy performance in the first half of this year is attributable to a couple of factors, including the start-up of a new electroplating plant for processing auto parts targeted at the aftermarket segment, successfully automated production at its plastic item manufacturing factory, and launch of new products.

Noteworthy is that Tong Yang has launched a foray into the Chinese market for aftermarket replacement parts covered by car insurance, since it passed the aftermarket parts certification launched by NSF International of the U.S. to meet the requirement from a local top-2 property insurance company. Presently, it is the first replacement bumper supplier obtaining the certificate in the marketplace.

Market observers generally opine that with its bumpers passing the NSF certification, Tong Yang is expected to gain more steam from the new business in the short term, given that China market for aftermarket replacement parts used by local insurance firms is estimated over RMB30 billion (approximately US$5 billion) a year, with over 150 million cars being insured in the country currently.

In addition to the aftermarket parts, Tong Yang has made good progress in the OE (original equipment) parts business. After building ties with China's major carmakers through its reinvested companies, the Taiwanese company is going to join a project launched by Changchun Faway Automobile Components Co. to establish a new factory in Qingdao, eastern China, in the second half of this year, which is scheduled to become operational by 2018.

Meanwhile, Tong Yang has also set up its second plating plant using trivalent chromium and satin nickel plating process in Taiwan, whose output measures up to environmental regulations by the U.S. and Europe and can help the firm to add better value to its OE items.