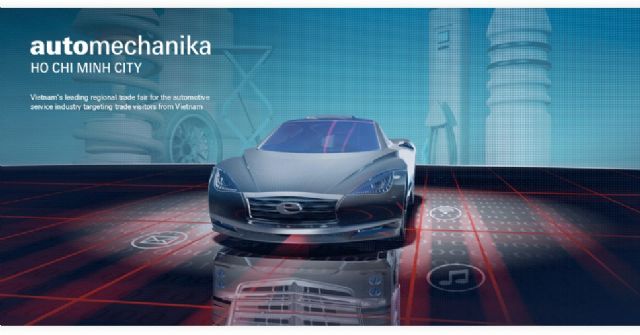 Chan Chao and its subsidiary in Vietnam, Yorkers, is an experienced trade fair organiser in diverse fields including automotive, electronics and machineries industries. The companies tapped into the Vietnamese exhibition market over a decade ago and are well-known for their professionalism. Automechanika Ho Chi Minh City is the 16th show under Messe Frankfurt's worldwide Automechanika brand exhibition. With an extensive network on all continents, the debut is catching the eyes of all industry players around the globe. The strong alliance leads to the success of Automechanika Ho Chi Minh City.

Vietnam's automotive market has great potential and is full of opportunities. There are currently 2 million automobiles in the country. The trade volume of auto parts and accessories recorded a 43 percent increase between 2010 and 2014. This figure is prosperous, compared to six percent throughout the world in the identical period.

Commenting on the new show, Ms Fiona Chiew, Deputy General Manager of Messe Frankfurt (Shanghai) Co Ltd, said: “Automobile production in Vietnam is expected to reach 227,000 units in 2020. Stated in the Vietnam Automobile Industry Development Master Plan, the government will regulate policies and mechanisms to boost the domestic automobile industry. The measures were taken due to various Free Trade Agreements, especially the ASEAN Trade In Goods Agreement, to reduce import taxes on cars and products in the range of zero to five percent. In addition to the fact that the country is the second most popular country of Foreign Direct Investment in the Asia-Pacific region, we predict there will be more manufacturers entering Vietnam. Automechanika Ho Chi Minh City can definitely accelerate the development.”

Mr Akai Lin, Project Manager of Chan Chao International Co Ltd, is also optimistic about the Vietnamese automotive market. “By the end of 2016, Vietnam is estimated to have 92.6 million inhabitants. The trade volume reached US$2.36 billion in 2014, which represented a CAGR growth of 9.7 percent. The population and trade reflect a huge market for the automotive industry,” said Mr Lin.

Motorcycle Expo will be a special showcase at Automechanika Ho Chi Minh City, to cater to the needs of the local market. There are currently 37 million motorcycles in the country. According to the Vietnam Association of Motorcycle Manufacturers, in the first six months of 2016, the sales of motorcycles reached 1.4 million units, an eight percent increase compared to the same period last year. This reveals that the motorcycle industry is booming in Vietnam. The expo is expected to attract major manufacturers, dealers and distributors to showcase the latest products and accessories to the entire motorcycle industry.