Well-received format to be continued in 2018 edition 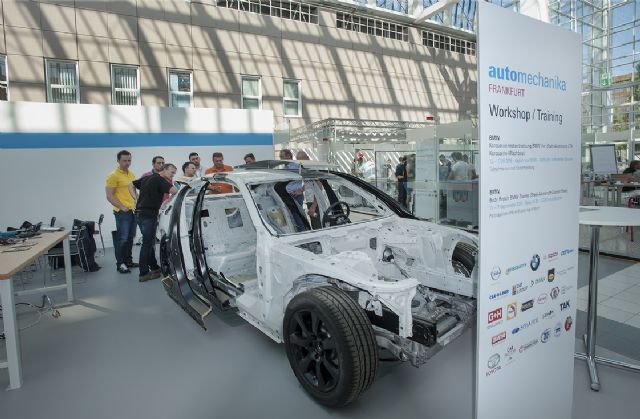 Two months have passed, since the 24th Automechanika trade fair closed its doors. Yet the impact of the trade fair continues to exert its influence well beyond that. Not only for the exhibitors, who can now rejoice in their full order books and excellent business deals. Visitors, too, are still dining out on the new products and accomplishments that they saw in Frankfurt. Not least, for example, in the advanced training workshops dealing with accident damage repair.

“Visit a three-hour-long practical workshop at a trade fair?! Surely, no visitor has time for that!” Thus runs the frequently expressed assessment of many pessimists. But anyone taking a look at the figures for the total of twelve workshops organised during this year's Automechanika, will soon discover otherwise. Over 800 visitors took advantage of the opportunity not only to examine new products but also to invest some of their time in extending their professional knowledge at one of the twelve workshops that were on offer, from 13 to 17 September, in the Galleria between Halls 8 and 9. This year, as had already been the case in 2014, they were conducted in German in the morning and in English in the afternoon.

Trade visitors had a choice between workshops, including “Systematic assessment and recording of accident damage in cars” and “Digital calculation and communication of repair costs”. There was also a workshop on “Trained personnel for hybrid / hydrogen-electric power units” and a great deal of visitor interest was generated by the sessions on “Reading stored fault codes / fault diagnosis / headlight adjustment” and “Diagnosing chassis and suspension faults / camera calibration”. In addition, the advanced training programme included workshops on new body-work assembly techniques, innovative materials and composites in motor-vehicle construction and new painting techniques. As proof of successful completion, participants in all twelve workshops were given a certificate of attendance at the end. As is usual in Frankfurt, all the workshops were distinguished by a high proportion of practical involvement and live demonstrations.

International public also keen to learn
The fact that the courses were offered in two languages – German in the morning and English in the afternoon – was very well received by course participants. Whilst many of the trainers felt that the morning sessions were more strongly attended, at the same time, a significant number of the international participants had deliberately planned their visit to Automechanika in Frankfurt, specifically with the workshops in mind. Lots of them attended several courses and took advantage of their visit to the trade fair as an opportunity to further their own personal professional development. As Dirk Breuer from Toyota puts it, referring to a group of Australian mechanics, who had attended his workshop (Trained Personnel for Hybrid Hydrogen-Electric Drive Units) and other courses: “The participants were delighted to receive a certificate.” Rainer Leikert from Beissbarth (Diagnosing chassis and suspension faults / camera calibration) described a similar experience. Alongside visitors from Australia and Asia, he also welcomed mechanics from New Zealand to his workshop.

Course leader, Michael Geiger from BMW also reported strong attendance figures from abroad. The subject of his workshop was body-work repairs to the new BMW 7 series, which are particularly challenging, on account of the various types of material that have been used in the construction of the vehicle. “We had a very well-informed audience in the afternoons as well and, through the workshop, we were able to reach precisely the target group we had in mind,” said Michael Geiger. These included students on advanced skills courses, preparing for their master craftsman certificates, damage assessors and representatives of insurance companies, as well as owners of repair shops and their staff from Germany and abroad.

Things heat up in the Galleria
Basically, all the trainers praised the positive attitudes of visitors, who were knowledgeable in their field and keen to learn. “Amongst the participants were one or two students, who attended our event just out of interest. Altogether the level of expertise amongst those taking part was very high and many of them were directly involved in the motor-vehicle sector,” recounts Klaus Dollas from Carbon, who was demonstrating new techniques for the removal of dents. The quality of participants was evident in the lively participation, the subsequent discussions and the perseverance and ability to concentrate of those attending.

Stamina and concentration were particularly in demand from participants and trainers alike this year. The high summer temperatures on the first three days of the show meant that things really did start to heat up beneath the glass roof of the Galleria.

Not very surprising then, that many of the trainers – as well as participants – of the workshops have expressed a wish for improved shade from the sun in 2018, as well as more powerful ventilation for the workshop areas. And, in terms of extraneous noise, there was a clear request for the Frankfurt Exhibition Centre to reduce the intrusive noise levels from other things going on at the show, with better sound insulation.