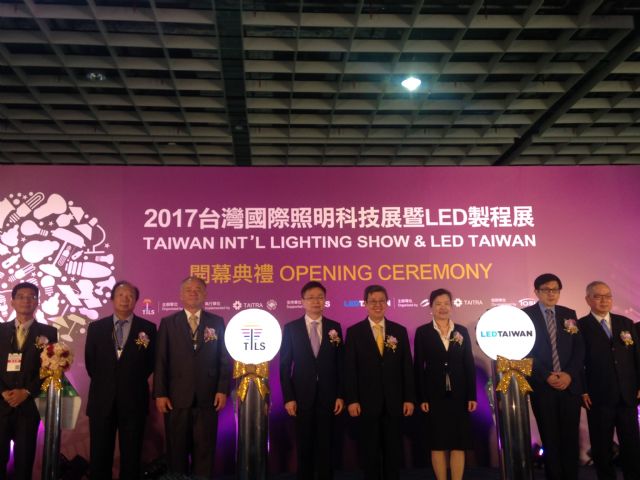 Yesterday saw the grand opening of the Taiwan International Lighting Show 2017 (TILS 2017) and LED Taiwan 2017, with a large number of officers, celebrities and media attending to underscore the growing influence of the two-in-one event, which gathers 150 exhibitors to represent a thorough supply chain of LED lighting, over the industry and global buyers.

At the joint opening ceremony, James Huang, chairman of Taiwan External Trade Development Council (TAITRA), Taiwan's semi-official export promoter and TILS organizer, noted that output of Taiwan's lighting industry reached NT$68.8 billion last year, with over 50 percent of which generated by products incorporated with LEDs. This, he stressed, is indicative of such an electronic component having become a contributor to the industry's development since used as a light source.

In light of the transition, Huang emphasized TILS and LED Taiwan, which have been held at the same time and venue for the fourth year since 2014, have combined to become Taiwan's most important sourcing platform, as well as one of world's major trade fairs that help propel growth of the global LED industry.

Also, to echo trends in the global LED industry for such niche applications as IR and UV LEDs, IR/UV and Laser pavilions are set up the first time. Hopefully, the chairman said, the trade fairs will attract over 1,000 global buyers during the four-day sapn.

On another front, M.H. Wang, Taiwan's deputy economic minister, mentioned that the combination of two trade fairs underlines the increasingly close tie between the lighting fixture and LED makers on the island, which has pumped positive momentum into the development of the LED lighting industry, especially when Taiwan boasts a globally unparalleled, well-integrated supply chain of semiconductors and LEDs.

Various projects implemented by the Taiwanese government are also noteworthy in bettering the situation. For instance, the deputy economic minister said, the government has poured over NT$5.3 billion over the past few years into replacing mercury-vapor streetlights for LED models, in an effort to not just nourish local LED lighting makers, but to attain sustainable living in Taiwan.

Taiwan Vice President Chen Chien-jen also visited the trade fairs yesterday and addressed the joint opening ceremony. He praised sincerely local luminaire makers for their collective effort to explore overseas markets, which have resulted in tremendous contribution to Taiwan's economic development over the past six decades.

With LED increasingly applied as the mainstream light source in modern times, the vice president stressed that the Taiwanese government has resolved to raise a ratio of the usage of renewable energy to overall power consumption to 20 percent by 2025 as part of Taiwan's new energy policy, which will call for more LED lighting products used to achieve. Meanwhile, the government has actively fostered the development of a green economy through different means, including the negotiation with WTO for the inclusion of Taiwan in the EGA (Environmental Goods Agreement). All these efforts, he went on, are expected to pay off and benefit local LED lighting suppliers in the near future.