To most car drivers, not only is parking time-consuming, but it is stressful, especially in a congested city with very limited parking spaces, like Taipei. However, such a situation that almost every local driver with his or her car on a busy street of the city has experienced is likely to change sometime in the future—literally, parking can be made easier, more convenient—with the smart urban parking concept to be promoted by Bosch in Taiwan.

At an annual press conference held in late May, Bernd Barkey, managing director of Bosch Taiwan, announced the company's plan to promote the Automated Valet Parking (AVP) system, to make driverless parking a reality on the island. 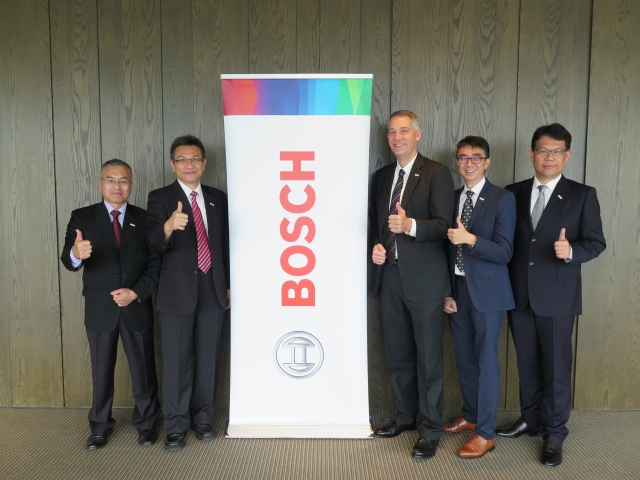 Designed to offer a fully connected, automated parking service, the AVP system is developed jointly by Bosch and Daimler. As Bosch's pilot project, the system has been constructed and demonstrated at the parking garage of the Mercedes-Benz Museum in Stuttgart, Germany. Despite still pending approval from regulatory authorities, including Baden-Württemberg's transportation ministry and experts from TÜV Rheinland, before it can be offered to customers, the system has left a strong impression on visitors at the museum since unveiled early this year.

The concept of the community-based driverless parking system, which is composed of controller IC chips installed in cars, a lidar sensor system in a parking facility and an app for use in smartphones, underlines the developers' out-of-the-box thinking. In the aid of this system, a car that a driver dropped off at the entrance of a parking garage is guided automatically to a vacant parking spot space without the need for any action by the driver. The car can self-drive away from where it is parked back to the entrance in response to commands delivered via the system from the app running on the driver's smartphone.

During the self-driving maneuver, the lidar sensors monitor the surroundings of the car to provide all the necessary information to the system to ensure safety. Accordingly, the technology enables a guided car to stop and avoid collision whenever a person or obstacle is detected on the route.

Effective use of parking spaces is another benefit of Bosch's community-based parking system. It can recognize and measure the size of the gaps between parked cars and transmit the data in real time to a digital parking-space map. In doing so, Bosch claims, AVP enables a parking garage to accommodate 20 percent more cars than an equal-sized one without the assistance of the system. 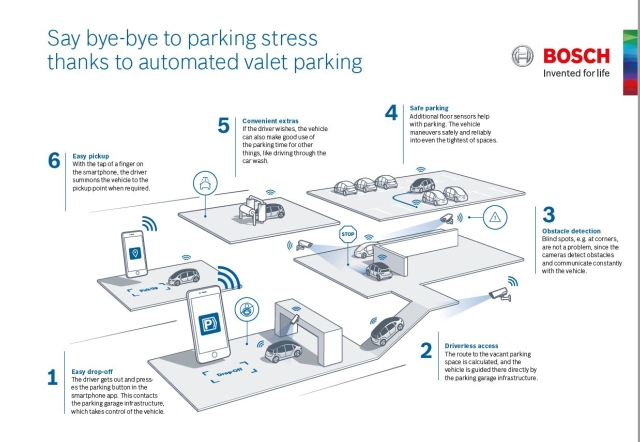 The automated valet parking system has a lot of impressive features as introduced on Bosch’s website (photo courtesy of Bosch).

At the event, Barkey said, “In Taiwan, more than 70 percent of the total population lives in cities. Searching for an empty parking space in the urban area is a time-consuming and stressful task for drivers. Therefore, we would like to bring the innovative concept of community-based parking as well as the automated valet parking to the local market.”

Despite still in the paperwork phase, Barkey stressed that Bosch has been in talks with local carmakers and related service providers for cooperation opportunities to promote the system in Taiwan. Once becoming operational, the system will bring about more positive changes to local people's lives than they might expect in the future.