At least 70% of Taiwan's hand tools industry is concentrated in Taichung and Changhua, according to a Ministry of Economic Affairs Department of Statistics report. Hand tools are the primary tools used for inspection, repair, assembly and disassembly, coming in non-powered and powered options. Most screws, nuts, files, wrenches and cutting tools are all categorized as non-powered hand tools, while powered hand tools come in pneumatic and electric types; the former includes spray guns and hand-held chain saws, and electric drills are categorized in the latter type. Boasting the reputation of “Hand Tool Kingdom,” the number of hand tool factories and employees in Taiwan have only gradually increased in recent years. For example, in 2017, there were 2,166 factories and approximately 46,000 workers in the industry, primarily concentrated among small and medium-sized enterprises (SMEs), where 70% of those SMEs firms have a work force of only 20 people and less.

Among the biggest characteristics of Taiwan's hand tool industry is the fact that the entire industry supply chain –from upstream to downstream – is located on the island, where it sees 68% of its firms in the industry congregated in Taichung and Changhua of Central Taiwan. Taiwan's hand tools are export-focused, in which direct exports make up 70% and has seen continual growth in recent years. Thanks to an economy revival in 2017 and buoyed by rising prices for international raw materials, Taiwan's hand tools exports increased significantly to approximately USD$376 million, making it the highest since 2003 and marking a 10.5% yearly increase. The economic revival continued into 2018, accumulating USD$352 million from January to November figures, marking a 3.0% yearly growth. Forecasts suggests 2018 could see a new record in terms of yearly exports. A closer look into Taiwan's exports between January to November in 2018 would show that non-powered hand tools make up a whopping 74.5%, while in the powered hand tools category, pneumatic types make up 19.6% and electric types at 5.9%. Compared to 2012, pneumatic hand tools rose 2.0 percentage points, while electric hand tools increased by 1.8 percentage points, however, non-powered hand tools fell back 3.8 percentage points.

Taiwan's hand tools primarily export to the U.S., China and Hong Kong. The U.S. is currently the world's biggest consumer market for hand tools, and has been ranked as Taiwan's top export country for many years. In 2017, Taiwan's hand tools saw export figures reach approximately USD$121 million to the U.S., cementing it as Taiwan's top export country at 32.2%, while China and Hong Kong saw USD$49.5 million in terms of export value, rounding up at 13.2%. This is followed up by Germany and Japan at 5.8% and 5.6% respectively. Taiwan's hand tools exports to the U.S. has only seen growth since 2012, indicating a 4.4 percentage point increase in terms of export ratio.

On the other hand, Taiwan's hand tools are ranked among the top four import countries in the U.S. hand tools industry. Figures indicate that the top countries with the biggest share in the American market are China and Hong Kong, both taking up 50.1% of the market according to statistics between January and October in 2018. At second place is Germany with 8.3% and Mexico at third with 7.4%, followed by Taiwan at fourth with 6.6%. For hand tools going into China and Hong Kong, figures in 2018 between January and November indicate Japan as the top importer at 25.6%, followed by Germany at 20.1% and Taiwan at third with 10.4%. In terms of product import performance, Taiwan's pneumatic hand tools performed especially well in the U.S., ranked second with 18.2%, and in China and Hong Kong as well, ranked first with 21.6%, surpassing Germany and the U.S. in 2015. 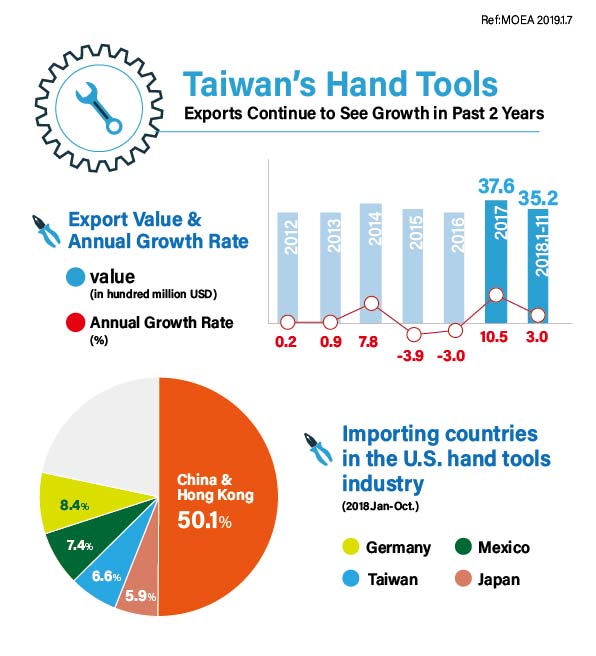