THTMA which is closely connected to Taiwan's hand tool industry held the 15th General Assembly and the election of the board of directors and Chairman. Huang Sin-der is the 15th Chairman and vice-Chairman is Maxclaw's General Manager Huang Wu-sun. Huang pointed out the hand tool industry in Taiwan has a comprehensive supply chain which is the biggest competitive advantage. The industry has created over NTD$120 billion production value, over four hundred companies and the size of the industry is ranked top ten among 159 industries in Taiwan which is the three major industries in central Taiwan. It not only creates production value but also more job opportunities.

He emphasized the hand tool industry is the only metal manufacturing industry which has been growing for more than 40 years which is not an easy accomplishment. Previously, President Tsai Ing-wen went to Taichung industrial park for inspection while Huang expressed to President Tsai Ing-wen that the hand tool industry has a remarkable 3.8% of growth rate in the second quarter this year. In terms of this, she gave a compliment to Taiwan's industry and promised to attend the general meeting this year. 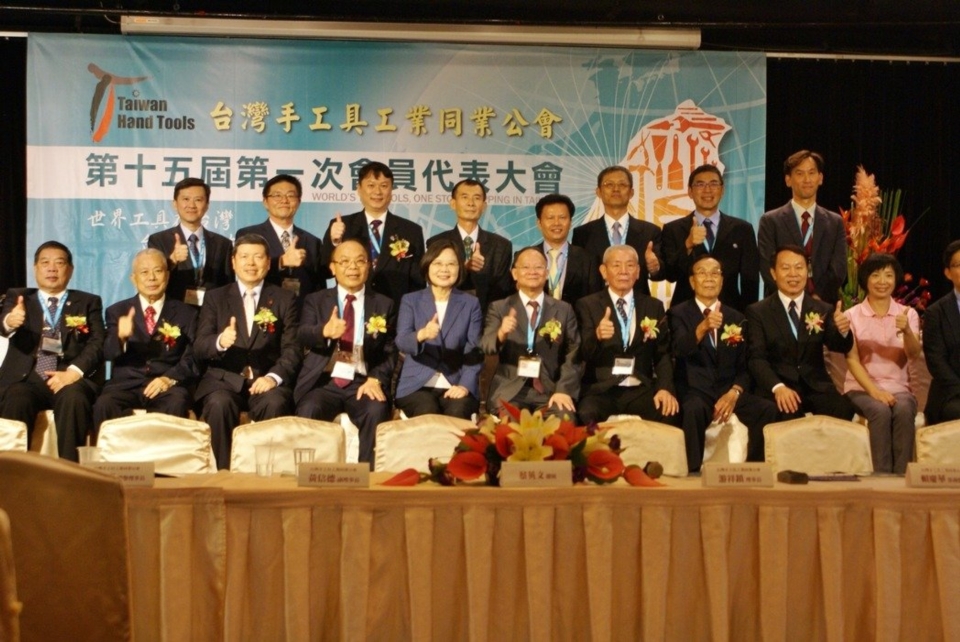 President Tsai Ing-wen attended the 15th general meeting of THTMA (photo courtesy of Wu Jing-chang)
President Tsai Ing-wen pointed out affected by the US-China trade war, it is really impressive when the hand tool industry has such performance. However, the government will stand by the side of the industry. The government has pushed “5+2 Industrial Innovation Program. One of the smart machinery targets on smart production, actively assisting hand tool industry to introduce in smart production, giving the industry a makeover. She also pointed out that this year, with many Taiwanese firms returning, the government has offered many incentives assist firms to find the land and funds, encouraging firms to stay in order to make Taiwan the first-class handtool kingdom.

Huang Sin-der who just elected as Chairman of the Taiwan Hand Tools Industry Association promised that he will make every effort to lead Taiwan to become the birthplace of innovative hand tool, leading hand tool industry to create the maximum value to allow the world to see Taiwan.