Chan-Ho Machinery Hardware Company was established at No .9l Hsioh-Fu Road South Dist Taichung in 1974.(The old name for the address is No. l Sec 1 Chung-Hsiao Road) and is engaged in the field of Hardware Machinery business.
To extend the service. The production Department was set up to produce a High Precision Drilling Machine at l9 Chia Tai-Ping Hsien in 1976.Later.The Production Department developed and Ait Hydraulic Riveting Machine and started production in 1977.
Due to the extension of the business,an Export Department was set up in 1980 to be responsible for export affairs.South...East Asia and Hong Kong were the main market. Also, Ying-Shih Corporation was authorized to be the General Agentin Tahiland, lndonesia, Singapore, Malaysia and Hong Kong to sell products and to connect the market with distributors in North, Middle, South Taiwan and mainland china.Now, the market is extended to Europe, America and Australia.
A Hydraulic Machine and an Air Hydraulic Double-Axis RivetMachine were developed,production ofthese machines started in 1983. And started production in 1983.
To upgrade the service quality the and company image. Cheng-Tung Limited Company wasfounded on March 10.1983.In order to strengthen production and upgrade productivity to internationalstandard, the company bought land at No.6 Alley6 Lane 535 Tung-Hsin Road Da-Le Hsien Taichung foruse as a plantsite.This plant starteditsoperationin 1989.
ln 199l , A SteelAutomatic Dr illing Machine was developed throuch technicalthe technique cooperation with the department of lRTI. In July 1994,We Joined the"ShuiChang Liu mutual cooperation exchange team"to learn,discuss and study with relevantsmall & middle enterprised for advancing self-growth. 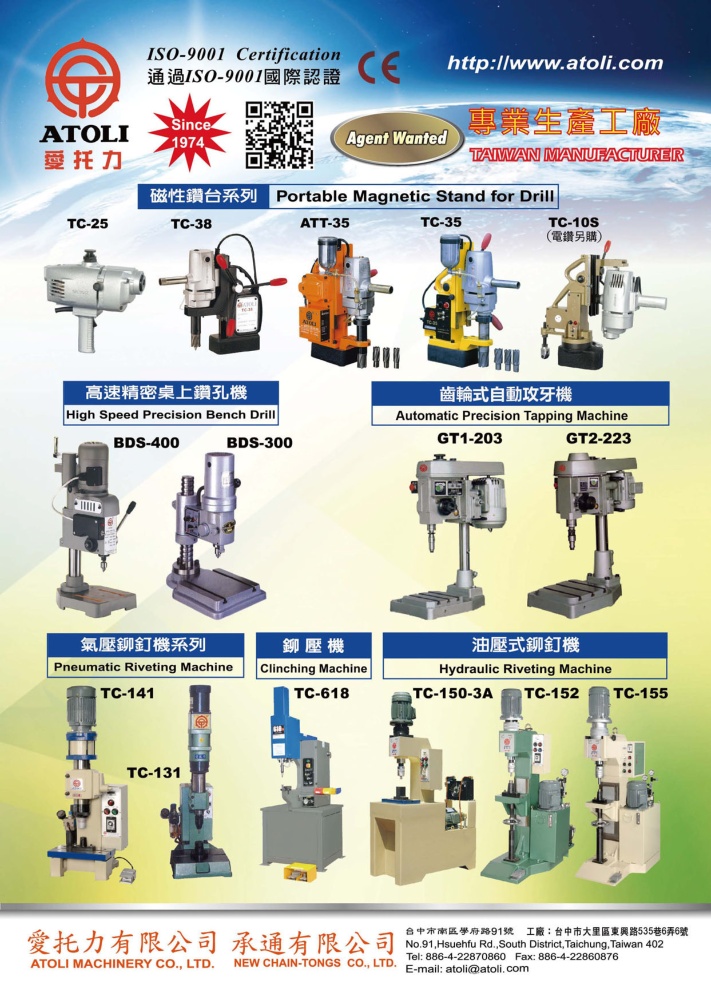